Home > Blog > E-Commerce > Development: should we turn to Node.js in the future?

Development: should we turn to Node.js in the future?

Node.js: the technology that goes up and up… and up again.

This is not a new topic for developers. Since its launch in 2009, Node.js has not stopped making emulators. Some see him as the future of programming, others don’t understand the hype. 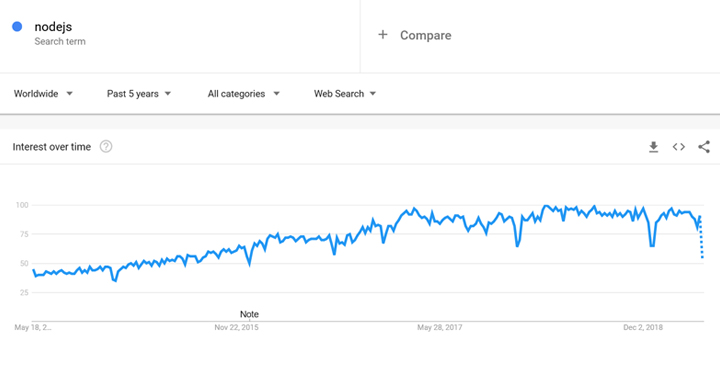 But first, what is Node.js? And how could this technology be useful for your website or e-commerce?

Node.js is an open-source environment for developing cross-platform applications. Based on Google’s V8, the JavaScript execution engine used in Chrome, Node.js processes data in JavaScript. 1st surprise: with Node, the writing is done in JavaScript not only on the client side, but also on the server side! Node competes with other server languages such as PHP or Java.

If Node.js can indeed be used as a server without needing an external solution such as Apache or lighttpd, it remains above all a JavaScript development platform allowing to answer many client/server needs thanks to the provision of an API.

Advantages and features of Node.js

The hundreds of thousands of modules added by developers in the vibrant community provide inspiration and the ability to do a lot of things without starting from scratch by having to code EVERYTHING. This strong community support makes it easy to share functional code snippets while having full access to the source code.

By allowing development in the same programming language on both the client and server sides, the performance of Node.js is very appealing to speed enthusiasts. The use of Node as a web server also makes it capable of handling a large volume of requests simultaneously in an efficient manner.

This high performance is due in particular to its asynchronous design, which avoids waiting. With Node, multiple queries can be performed at the same time. No need to wait for a long action to finish before starting another one!

Compared to PHP, this saves a lot of time. Indeed, PHP executes requests in a sequential way: the client waits for the server’s answer before launching other operations. Action A must be completed in order to execute action B and so on. With Node.js, the waiting time is reduced since it is event oriented: it is thus able to execute several actions at the same time. 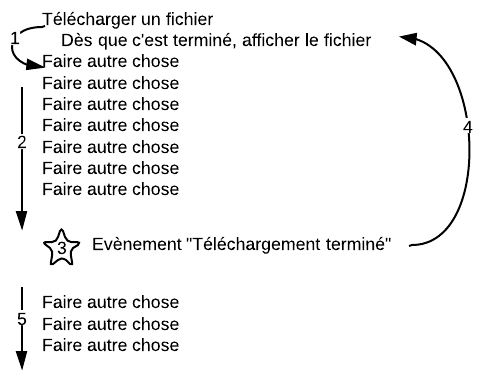 As such, the online payment service PayPal, which has adopted Node.js, reported that its number of requests received per second had doubled and thus decreased the response time by 200 milliseconds, or 35%.

Another strong point of Node.js? Streams. They will allow, for example, to process a file even if it has not been downloaded yet.

This increased performance also allows JavaScript to get back into the mobile-friendly race as Google announced this year the launch of its AMP format, summoning mobile site editors to rid their code of JavaScript, which is considered poorly performing.

When to use Node.js?

Node.js has a number of impressive features to enhance the user experience in a multi-connected environment. Its fields of application are therefore numerous:

Natively, Node.js supports websockets that allow the implementation of responsive applications facing a large volume of requests to be processed in real time. With Node, the transmission of data to the client is automated: an action carried out by a user is reflected directly on the other users. In other words, as soon as new information is available, it is automatically made available.

This is very useful for projects requiring real time. Real time: a game-changing concept. It offers the possibility to manage and connect a large volume of people efficiently. In 2013, for example, the Walmart e-commerce site successfully used Node.js during Black Friday, the biggest day of the year in terms of e-commerce traffic in the United States.

Let’s take the example of a cat. Instead of a page automatically reloading to show new posts, the conversion is displayed in real time. Very useful to set up a chat with a technical support in order to improve the service offered to the customer of an e-commerce. For example, the Facebook chat and search engine are partially developed with Node.js.

Companies facing the challenge of developing applications to respond to rapid change are therefore particularly concerned by Node.js. Reactivity, performance and the ability to support a large volume of requests without a dedicated server make Node.js a technology to consider for the creation of an e-commerce.

Node.js seduces the big players of the web

The reliability of Node.js is debated within the developer community. However, many companies have already adopted it.

In 2015, IBM was acquiring StrongLoop, the builders of the popular open-source Express.js project. And other large companies have opted for Node.js: Microsoft, IBM, Yahoo!, Netflix, Groupon or even PayPal, which in 2013 migrated its applications from Java to Node.js.

Recently, LinkedIn reconsidered its mobile server infrastructure and moved from Ruby on Rails to Node.js. Results? Better performance (up to 20 times faster) and more scalability!

On the side of Netflix, we boast since the rewriting of its site in Node.js of a gain in productivity and faster page display. Groupon, a shopping cart site, switched from Ruby on Rails to Node.js and boasts a 50% decrease in page load time.

And if those examples aren’t enough to impress you, you should know that NASA recently declared that they are using Node.js to“develop systems to support current and future space operations”. To organize spacewalks, no less!

After installing Node.js, developers have a choice of frameworks to help them develop fast, scalable, real-time websites.

By generating the basis of a project, frameworks allow you not to start from scratch. Node.js includes a lot of extra frameworks, but if we had to choose only the most powerful and popular Node.js frameworks, there would be four of them:

Fast, easy to use and easy to learn with a JavaScript practice… All of these reasons that have driven large companies to take the plunge make Node.js definitely worth taking seriously for 2020.

Because yes, Node.js is well on its way to staying.