The best wine and spirits ads

Communication campaigns on the themes of wine and spirits must have an impact in a highly competitive sector. Companies are constantly reinventing themselves to stand out from the crowd, they have to be creative to stay in the minds of consumers and win new customers. In a society where advertising is omnipresent, brands use all their imagination to seduce. Alioze presents you some of the brands that have managed to stand out. Here are the best wine and spirits ads of the last few years.

Ipsos has put together a top of the best spirits ads of 2018. The number one spot went to Clan Campbell, the whisky of the giant Ricard and its legendary slogan ” Here begins the clan, the Campbell clan “. This ranking is generated according to the intensity of the media plan, the width of the target, and the purchases generated.

Since 2013, the whisky brand had already renewed its message. After 15 years of communication around the notion of Scottish land, ” you are entering the land of the Campbell clan “, the brand is making a turnaround by no longer valuing only the raw materials of the product, but also the people. The Jesus agency chose to photograph employees, as a group, in the distillery.

Photographer Christian Witkin highlights the clan in the colors of the earth to reveal authenticity and know-how. The spirits brand is becoming more human. She appeals to her target, thanks to this notion of belonging, and includes him in the big family of the Campbell clan.

The M & C Saatchi Gad agency proposes an advertising campaign based on chic, yet funky visuals . Its objective? Desacralize champagne by targeting millennials, young people between 25 and 40 years old.

The posters associate the alcoholic beverage with salty or sweet dishes that one would not necessarily expect to accompany it: sardines, eggs, chouquettes and doughnuts are interfered with in a setting that is surprising, to say the least.

The General Union of Champagne Winegrowers (SGV) has allocated a budget of 4 million euros per year, for three years, to break the codes and rejuvenate the champagne. As the slogan says, champagne is not only kept for events, but is “reserved for all occasions”. 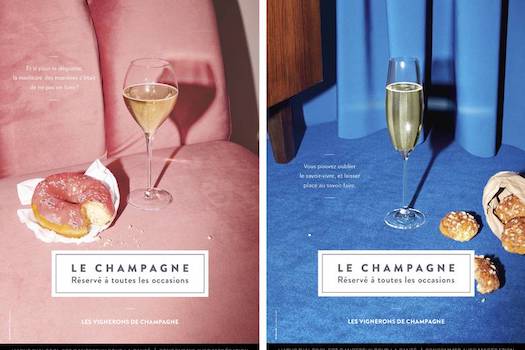 Two visuals are proposed by the photographer Lucy Sparks and two others by Marius Hansen. Lucy offers “sweet pleasures”, colourful and intimate visuals aimed more at a female target, while Marius’ “cold dishes” are aimed at a male audience, featuring dishes on a table corner, fresh out of the fridge and meant to be eaten on the go. Informal, casual, spontaneous are the key words of these ads.

The results according to Ipsos were excellent. This major communication operation included 2,000 posters in Paris, 7,000 throughout France, 80 press advertisements, some 50 articles, 26 visuals and three videos on social networks.

Already in 2008, the Beaujolais interprofessional association had offered the creativity of the artist Ben for a communication campaign with a total redesign of its image. A dynamic slogan, “the new has arrived” was intended to target a younger audience. The Beaujolais Nouveau repeats the experience in 2009 with a new artistic movement, pop art. It called on the Euro RSCG agency and invested 500,000 euros in a substantial communication plan: posters in flashy pop colours and a catchy slogan. Hundreds of billboards have been deployed in 54 French cities to reach consumers in their daily lives.

The idea was to tackle the image of the old-fashioned Beaujolais Nouveau by rejuvenating it, to fight against preconceived ideas and to revitalize the brand, even more so for this year 2009. In fact, according to Anthony Collet, the marketing director of the Beaujolais interprofession, the 2009 vintage is “one of the greatest vintages that Beaujolais has ever seen”. 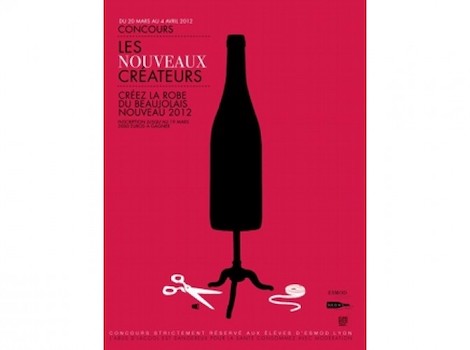 This advertisement, designed to reinvigorate the image of Beaujolais Nouveau, was a success. Sales volumes were up by 0.7% and revenues by 1%.

This spirits retailer aimed big by choosing the short film form with a dream cast, Jude Law and Giancarlo Giannini, for its 2014 and 2015 ads.

This communication plan consists of two opuses. The first one shows the two actors exchanging on a sailboat in the British Virgin Islands. Jude Law offers to buy a boat, a Baglietto, in exchange for a dance. The clip was directed by Jake Scott, the son of the great director Ridley. The clip has been viewed over 45 million times worldwide.

In 2015, The Gentleman’s Wager II, again directed by Jake Scott, is a 6:31 minute film. It features, once again, the two men, accompanied by the actress Zhao Wei. This time they are competing to win a Delahay 135 S, the model owned by the Walker family for 30 years. The only reason Jude Law wins the classic car is because of the gratitude and appreciation he has for the people who have accompanied him on his quest. The values of the brand are perfectly conveyed here.

If you too would like to create impactful advertisements to match your brand, contact Alioze, an agency specialising in the wine & spirits sector.