Home > Blog > Advertising > Real estate : the most beautiful communication campaigns and advertisements of these last years

Real estate : the most beautiful communication campaigns and advertisements of these last years

Some advertising campaigns are remembered for a long time because of the way they capture attention. In a sector as competitive as real estate, which companies and real estate agencies have managed to stand out from the crowd?

We have selected 5 advertisements and real estate communication campaigns that have managed to stand out thanks to content that is sometimes innovative, sometimes risky, but original enough to surprise us!

In partnership with local associations such as the Red Cross or the Restos du Coeur, the Century 21 group is using their real estate agencies to collect toys. Since 2013, several million games, puzzles, stuffed animals, dolls and many other toys have been collected and then redistributed to disadvantaged families and their children. This operation has taken place every November since its launch and has been a real success throughout France. For Century 21, it is therefore out of the question to leave disadvantaged children without gifts in the run-up to Christmas. It is also a great opportunity to create links with the inhabitants who come to drop off all sorts of toys. In order to prevent the spread of the virus, a period of isolation of the toys is respected by the associations. They will then be given to the beneficiary families. A very nice communication campaign with a social dimension that fully deserves its place in our top 5 real estate ads! 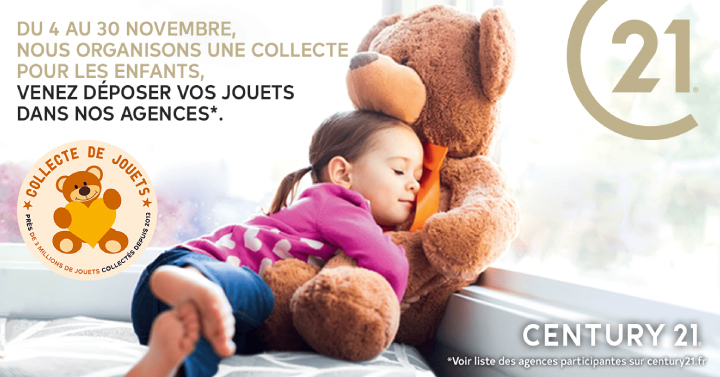 2 – IAD relies on humour with a TV commercial

Do you remember the movie War of the Roses? Over the years, a married couple comes to hate each other until their home becomes a battleground. The idea was picked up by the real estate network in 2019 and shows, in the first few seconds, a man hanging from a candlestick in fear. The camera then moves away from the husband and the spectator discovers a totally ransacked living room. A telephone message is then heard: the real estate agent calls the couple in the middle of a divorce only six months after their last contact. In the meantime, the relationship between the husband and wife had deteriorated to the point where the house was uninhabitable and in a state of disrepair. In a humorous tone, this advertising campaign aims to highlight the availability of IAD real estate agents.

3 – The great adventure of a real estate project with Laforêt

It is not uncommon to hear around us that a real estate project is a period of life full of twists and turns, anecdotes, trials and joys. The Laforêt group, voted best real estate network in 2020, tells the story of a family who wants to buy a beautiful house. This television campaign, entitled La Belle Aventure, retraces the different stages of a purchase: the online ad, the virtual visit followed by the physical visit, the loan granted by the bank, the successful negotiation and finally the signing of the sales agreement. In this 30-second commercial, the staging is dynamic and visually pleasing thanks to numerous special effects. Through this communication campaign, the Laforêt real estate network sends the message that it has perfect control over digital tools, without denying the efficiency and the relationship of its agents.

4 – Orpi : The real estate in the first person

In a 56-second TV spot, the word is given directly to the property! A rather original idea from the Orpi group, which launched this communication campaign during September 2018, over a period of three weeks. So during this minute of advertising, the real estate guy talks about himself in the first person and begins: “You and I know each other well“. He describes himself as sometimes charming, sometimes isolated and often in need of care.

This communication campaign aims to put the real estate agent at the centre of a successful transaction. For Orpi, a real estate transaction requires the support of professionals with skills and experience in this field. While not visually striking, this spot stands out for its unique concept and is therefore in our top real estate ads.

5 – The Modern Wisdom of the Best Agents

Who has never dreamed of consulting a wise man from a wonderful world to guide his life choices such as… the estimation of a 3 room apartment with balcony? Set in a medieval atmosphere, this Best Agents ad shows a young couple who have come to consult an ancient sage who is supposed to hold the universal truth. The two lovers ask the old man about the price at which their property could be sold, and about the real estate agency to which to entrust the sale. Using the Best Agents app on his phone, the wise man with the long white beard answers them accurately and the couple is satisfied.

This film, cleverly mixing humor and fantasy atmosphere, certainly made many fans of the heroic fantasy genre smile.

Through this advertising campaign, the Meilleurs Agents platform invites individuals wishing to sell their property to have a first estimate of the selling price thanks to their real estate portal. The future sellers are then advised in the choice of an agency, partner of their comparator. Simplicity, efficiency and trust are the values highlighted in this TV spot broadcast in January 2020. With its offbeat tone and Lord of the Rings-like setting, The Wise Man of the Best Agents deserves its place in our ranking!

Among this selection, one of them caught your attention or gave you ideas? The Alioze agency advises and accompanies you in your marketing project. Specialized in real estate communication, our team mobilizes all its skills and creativity to represent your values and contribute to your success.