Lawyers: the most beautiful communication campaigns and advertisements of recent years

In 2014, lawyers finally get the right to advertise! This is a real evolution for the profession that was made possible by the decree of 28 October 2014. These communications operations are regulated and must not prejudice their colleagues.
Although advertisements for lawyers are less frequent compared to other sectors, the possibility of gaining visibility through communication campaigns is now available to them. With the number of professionals growing every year, the competition is becoming more and more intense.

It is therefore necessary for these legal professionals to stand out while respecting the ethics inherent to their profession. Our agency offers you a selection of the most beautiful communication campaigns for lawyers.

1 – The CNB opens the ball with its campaign: “You, your rights, your lawyers

The National Council of Lawyers is the representative of all legal professionals throughout the country. Taking advantage of the new decree allowing regulated advertising for the profession, the CNB launched one of the first extensive communication campaigns in October 2014. The objective of this operation was to affirm the mission of legal aid and advice provided by lawyers to French citizens.

It was therefore not intended to highlight any particular firm, but to honour the profession itself. Over four weeks, two radio spots were broadcast on national and regional media such as RTL, Europe 1 and France Inter. 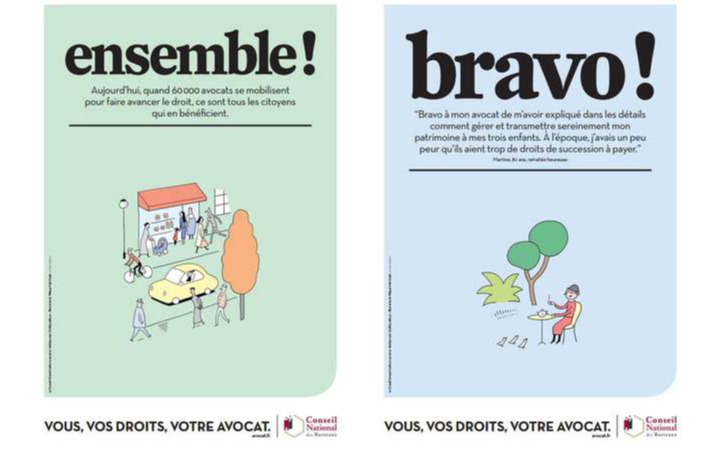 In order to reinforce the impact of this operation, four visuals were also published in the daily press and magazines: Les Echos, Fémina, le Figaro, France-Antilles, etc.
Each illustration features the campaign slogan: “You, your rights, your lawyers”. It reminds us that justice is an integral part of our lives in society and that professionals can help citizens to enforce their rights.

2 – The Lille Bar plays the humor card: “This is not a lawyer

While lawyers had just been given the opportunity to launch their campaign in 2014, the first bar to seize the opportunity was Lille. To do this, he chose to appeal to the latter through a poster presenting the fruit and playing on the different meanings of the word “avocado”. This was posted in the Lille area in May 2014 and was also in print format in the regional press. 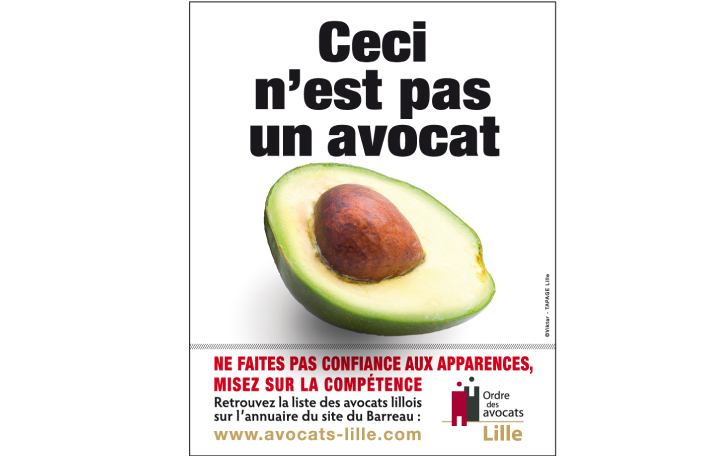 The humour in this poster draws the viewer’s attention to the text below the main image. He wants to emphasize that the expertise and skills of a professional take precedence over physical appearance or nice promises. To avoid calling on an unqualified person, the campaign invites prospects to rely solely on the directory proposed by the Lille Bar Association. A warning that is sure to make people smile!

3 – “Never without my lawyer”: the campaign in the digital age

Between May 2016 and December 2017, the NBC presents a new communication campaign in the form of a web series. Broadcast in two seasons of eight episodes each, the “Jamais sans mon avocat” campaign features Lola, a young woman, in various everyday situations. Each new episode presents a new context: renting an apartment, starting a business or getting married. On these occasions, those around her advise her to consult a lawyer to inform her, accompany her in her legal steps and advise her.

Each one-minute episode is an opportunity to illustrate the role and areas of intervention of lawyers to viewers: business law, employment law, choice of matrimonial regime and much more.
The series has been broadcast on the web as well as on various television channels such as TF1 and BFM Business. For the CNB, the campaign is a real success; and for good reason, the first season collected 6 million views and the second 8 million!

4 – The legal profession in the spotlight with Law Week

With the aim of making the general public and companies aware of the missions of lawyers, the Conseil National des Barreaux (National Bar Council) is launching a new communication operation entitled: the Law Week.

May 20, 2019 marks the start of this advertising campaign to highlight the legal profession and promote the avocat.fr intermediary platform. It provides a more accessible connection for French people wishing to seek assistance, advice or legal defence services from legal professionals.
For seven days, several media are involved: social networks, radio, magazines, and especially the national press with newspapers such as 20 minutes or Le Figaro.
The core message of this campaign having ended on 26 May 2019: the law is available to all.

Do you have the desire to create a campaign that respects the ethics of your profession? Our agency Alioze, specialized for lawyers, helps you gain visibility while reflecting the values of your firm.